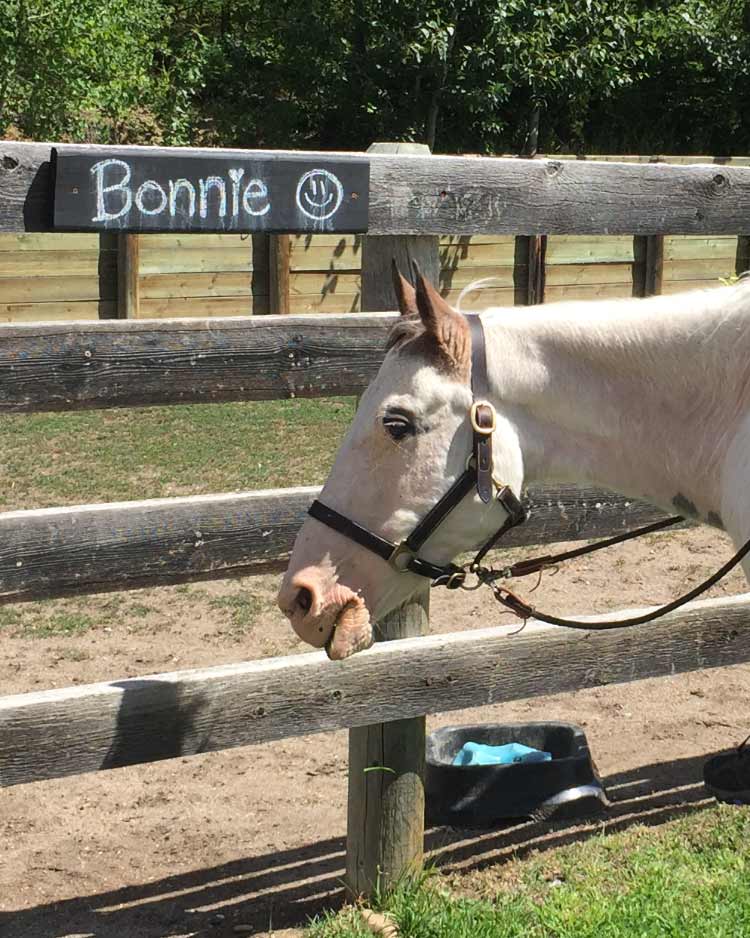 Bonnie is a 25 year old, 13.5 HH, rescue horse. She was on the way to auction last fall with four other horses. Her owner was a 96 year old man who was saying goodbye to his farm.

Bonnie fell down in the trailer and was trampled by the other horses and was not able to be sold at the auction after all. She went back to the empty farm and was abandoned there because nobody wanted her. Winter was coming and the man couldn’t drive, or get regular rides, so it would be very difficult to get out there and break the ice on the water trough and feed her because there was no hay stored for the winter for her to eat. The man felt so bad that she was suffering out there on his old farm all alone, so he planned to shoot her in three days if nobody came to get her- (because nearly a 100yrs ago that’s what their options were!) I was shocked!

I had leftover hay and a truck and trailer so two days later, after dropping the boys off at school I drove an hour or two to a small town in Saskatchewan to meet this special old man and to meet this special horse – to see if she could be rehabilitated! I had no address, only verbal directions and a phone number. I knocked on the door of “the blue house behind the hockey rink”, and hoped the story was true for I had driven a long time. Sure enough the door opened to an old man – with one eye, a missing tooth and a cane – as perky as ever. He exclaimed , “You must be here to pick up my Bonnie!” I said, “Yes, I am!”. He climbed into the truck and during the 30 minute drive he proceeded to tell me of the stories over the course of his life.

Arriving at the farm, he asked “You mind if we check on the old house first?” I said, looking at the time, “Of course!” Locating the hidden spare key, we entered the abandoned house and more colorful stories filled each room, bringing them to life. Countless minutes later he announced , “I bet you want to meet my Bonnie now?” I said, “Oh yes!”, but I was finding the whole adventure amusing and delightful! Opening the gate, we drove into a prairie field with beautiful native grasses blowing in the wind and we were driving slowly over small hills with the trailer in tow. “This horse could be anywhere!” I thought anxiously thinking of the time, as I still needed to pick the boys up from school in time. There were acres and acres of never ending grass. Just then, the old man said. “There she is!” And when I squinted I spotted a white dot standing alone in the field. “There’s my Bonnie!”, the old man said. She came right up to us and received her new halter which fell over cuts and scratches and open wounds. He, nor did Bonnie seem to mind and she led calmly into the trailer – even in light of the past accident. He said to me with a toothy smile “This was meant to be!” We approached the gate and he instructed, “Leave the gate open, there is nothing to lose now”! And I was amazed with wonder if this was the last time he would ever see his farm again.

Upon arriving at the blue house, I gave him a dollar and signed a bill of sale to make it official. He thanked me for the fun day and said, “I could buy you a coffee with this dollar!” But I told him I had to pick my kids up from school – which I did just in time to hear the bell. Did they ever have a surprise when they looked in the trailer! That is how I became part of Bonnie’s story, and she became a part of mine. 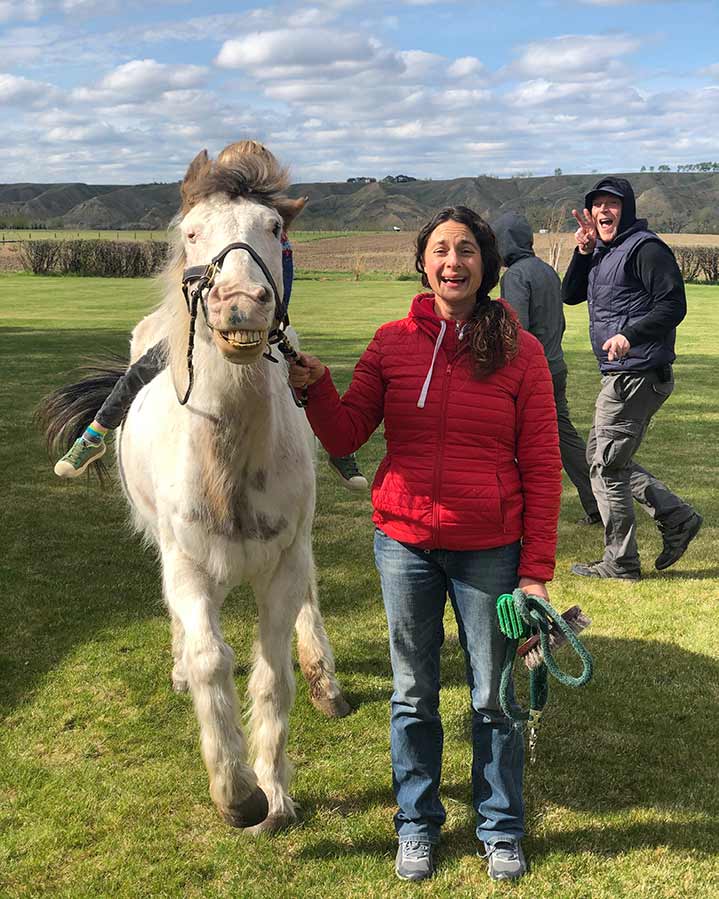 Since then she has touched many more lives. My dad agreed to nurse her back to health on his acreage where I had left over hay from my last horse and an empty corral. She got my dad outside every day through a long winter and out to his happy place – the shop. My mother who never took much interest in horses before was soon leading her by the river with my dad’s help for a walk. And, our ferrier, a very special lady came the next day to meet Bonnie and to “get her nails done” because she needed it badly but she also helped book an appointment with her horse dentist that very same day! The dentist heard her story and donated the treatment after the exam and blessed us! We were given advice on how to boost her diet and with a little tender loving care her wounds healed up. She started to show interest in people and even got her voice back, because before she couldn’t even “neigh!” A few months later I figured she was ready to try putting on the saddle. But when I got 2 feet from her, she gave me a sour face and the stink eye! It was like she was saying, “Don’t you know I’m retired?!!!!” (A saddle means work! ) So when the kids came clamouring to ride her we put them on her bareback and she showed us her toothy smile! There is now an unofficial, “Bonnie Fan Club” because EVERYONE loves Bonnie! Best horse ever for a dollar!

Ps. 9 months later a local horse lady visited Bonnie and exclaimed, “This horse horse is very rare, she is a “Medicine Hat Horse!” We looked it up online and were in for a surprise! Check it out for yourself!

Bonnie will be available for pony rides and pictures upon request at Eagles Nest Ranch during the summer and available for “snowsuit rides” in the winter months on Sunday afternoons located at the City limits. Book your spot to meet Bonnie today!

Epilogue:
I believe everyone has a story that needs to be told. I also believe God cares deeply for the vulnerable sector of our communities-We need them and they need us!

Ps. On the drive back I had a chance to share my faith in God with this special man. He confirmed that God had indeed had a hand the events of the day and shared about his trust in “Jehovah!” Recently I found out that he passed away 4 months after I brought Bonnie to her new home. We all have a story to tell and it has the power to change a life. What’s God doing in your story? Write us an email today so we can pray for you during your time of need.

From April 19th to 23rd, drop off your bottles at our office between 8:30 am and 4:30 pm to support the ministry of Eagles Nest Ranch.

Stay in the loop

Subscribe to our newsletter to receive information on camps, retreats and other events at Eagles Nest Ranch.
You can cancel at any time